As of press time, tickets were still available for the Perla Batalla’s second concert at the Beatice Wood Center for the Arts on Saturday, February 11 (Friday’s show sold out). You can expect selections from Perla’s original Mestiza song cycle, her one-woman Frida Kahlo show, the Great American Songbook Spanish language classics, new original work and several selections of Perla’s arrangements of Leonard Cohen songs. Ticket information can be found on the venue website at BeaticeWood.com.

Traveling through town on what they’re calling “Kick Up Your Boots” tour will be three solo female singer/songwriters, Thea, the Band (San Diego), Micah Justice (Inland Empire), and Katie Leigh (Ventura). They’ll make two stops locally, one at the Ojai Valley Brewing on Friday, January 27 and then again at Topa Topa Brewing on Colt Street here in Ventura on Saturday, January 28.

The Ojai Underground hosts the Refugees on Saturday, January 28 featuring a trio of artists including, Cindy Bullens who toured with Elton John and was nominated for two Grammy awards, Deborah Holland from Animal Logic (Stanley Clarke, Stewart Copeland), and Wendy Waldman co-writer of Vanessa Williams’ No. 1 hit, “Save the Best for Last.” You can get ticket information at OjaiUndergroundExchange.com.

Skull & Roses returns to Ventura in spring over the week of April 19 through 23 at the Ventura County Fairgrounds with Phil Lesh & Friends playing the two final days. Other performers include Melvin Seals & JGB, Dark Star Orchestra, Oteil & Friends, Jerry’s Middle Finger, local favorites, Shaky Feelin’ and so much more! You can find everything you need from passes to lodging and camping information at the official website SkullAndRoses.com.

And in case you hadn’t heard, the Strawberry Festival returns this spring, May 20 – 21, in a new location at the Ventura Fairgrounds. Live music is a big part of this event and this year they will have three stages going all day both days including a battle of the bands contest. The official website hasn’t listed any bands yet, but I noticed that Stage #3 is presented by Rock City Studios out of Camarillo with this stage featuring students of all ages and skill levels. I love that!! You can keep in the know at CaStrawberryFestival.org.

Randy Parsons has left the building? Randy packed up the prime space he had occupied upstairs since 2014 overlooking Main and Chestnut for Parsons Guitars (past clients include Jimmy Page, Jack White, Sammy Hagar and others), it was where he created state-of-the-art, one-of-a-kind guitars, and where he provided luthier workshops for those who wanted to learn how to build their own guitar which included students such as Ventura’s own Gary Best.

I asked Randy for any final words and he told me, “I really loved Ventura, it’s a special place, the people are all pretty damn cool, although I’m still convinced the whole city is some type of witness protection program.”

I thought about it, and I can’t disagree! Though totally talented and incredibly nice, I always admired his love for cats; there’s just something about a man who adores the feline species. Randy and wife have landed in Kansas where they bought a castle looking church moving on to their next adventure.

And speaking of next adventures, Colin Bailey has also left the building, he passed away peacefully at his home in Port Hueneme at age 87. I met Colin when I saw him first perform at Squashed Grapes in 2015 with the Frank Potenza Trio. Adam and Josh from the Grape told me to look up Colin’s background which I did and I was just floored. This man had not only worked with Frank Sinatra, Benny Goodman, Joe Pass and dozens more, he not only recorded on more than 100 jazz albums, he not only continued to give drum workshops including those at Pulse Drumming here in Ventura, but he was the drummer on the Charlie Brown Christmas special, a cartoon special that will always take me back to my childhood!

For some reason, there are so many special events falling on the same day, Saturday, October 9; I’ve listed them here along with websites to find out more:

Quick Notes: Congratulations to Suzanne & Ian McFayden (50 Sticks of Dynamite, Duncan and the Dragonslayers) for tying the knot; tickets are on sale for the Ventura Winter Wine Walk for December 11 sometimes called the event of the season if not the year for downtown Ventura (CBFProductions.com); Cadillac Zack presents the Delgado Brothers at Cantara Cellars on Friday, October 8 and the legendary band Canned Heat plays Thursday, October 14 (call Zack at 323-377-5291 for tickets); Ojai Pops Orchestra has a free show at the Libbey Bowl on Sunday, October 10; Ventura Theater shows include Social Distortion October 6 (rescheduled for Monday, October 11), Pennywise with Dead Kennedys on October 7, Pennywise with Strung Out of October 8, and Elefante, Inspector on October 15; Queen Nation plays a free show at the Collection at Riverpark in Oxnard on Wednesday, October 13 at 6:30 pm; and Phil Salazar & the Kin Folk play the Ojai Underground Exchange on Friday, October 15 and Saturday, October 16.

VenturaRocks.com is undergoing changes. I’ve invested in a new calendar app which doesn’t seem to be saving me much time, but I can load items way in advance which should help in the long run. The look and feel is evolving and for the time being, I’m covering all of Ventura County. 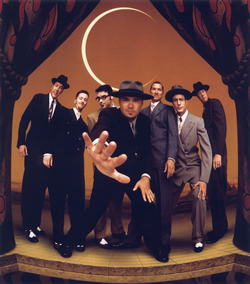