Finally!! The Ventura County Fair runs Wednesday, August 3, through Sunday, August 13, featuring tons of music in and around the fairgrounds (Seabreeze and Station stages) as well as the featured national acts on the Grandstand stage most evenings. The concerts are always included in the price of admission. Here’s the schedule: Thursday, August 3, a double bill with Smash Mouth and Sugar Ray; Friday, August 4, it’s the return of Huey Lewis and the News; Saturday, August 5, dust off your dancing shoes for KC and the Sunshine Band; Sunday is the traditionally Dia de la Familia and this year it features Chiquis Rivera, Noel Torres and Banda Carnaval; Monday, August 7, it’s country star Billy Currington; Tuesday at 1 it’s the Spinners, then 7:30 it’s Kenny “Babyface” Edmonds; Wednesday, August 9, it’s rock with Shinedown; and to wrap up the concert series it’s Wynonna and the Big Noise on Friday, August 11. All concerts (except the Spinners) start at 7:30 pm. All music and events can be found online at www.VenturaCountyFair.org.

Oh! Speaking of the fair, the Ventura County Fair Parade rolls down Main Street downtown Ventura Saturday, August 5 at 10 am. There’s always plenty of music; I’ll be hanging out on the Squashed Grapes float along with the Barrelhouse Wailers.

And speaking of Squashed Grapes, they have quite the week lined up with Lett, Mancini & Dutt on Wednesday, August 2, followed by Nees Bees featuring Nee Sackey and friends on Thursday, then it’s “Organtua” on Friday with Karl Hunter, and Jimmy and Mario Calire followed up on Saturday, August 5, with Tia Brazda (from Vancouver) who has been touring all over the United States and Canada this Summer.

Music Under the Stars is in full swing and it’s as popular as ever. Coming up Saturday, August 5, it’s Orquestra Charangoa and then Saturday, August 12, it’s a celebration of the music of Joni Mitchell. It’s better to get your tickets in advance, but if you can’t, be sure to check before heading out to ensure tickets are still available on the City’s website (www.CityofVentura.ca.gov).

Quick Notes: The Golden China is hosting a Roots 805 Jam on Saturday, August 5th with Jah Mon Soul, Ras Rebel and Rising Son; The Queers along with The Ataris and Bad Samaritans play a pop punk show at Discovery on Sunday, August 6; Toad the Wet Sprocket is at the Libbey Bowl August 6; and The Museum of Ventura County’s “Speaking Of” lecture series will be featuring Fito de la Parra (Canned Heat Drummer) on Thursday, August 10.

And finally, congratulations to Night Demon who landed themselves on the same bill as Ozzy Osborne, the Deftones and Prophets of Rage when they play Ozzfest this year, November 4 at Glen Helen Amphitheater. Now that freakin’ rocks!!

The Tequila & Taco Music Festival will take over Plaza Park the weekend of July 22 and July 23. DJ Cue will be entertaining both days with live music from Metalachi and Sambada on Saturday, and then on Sunday, Sambada returns followed by a tribute to the late great Selena by Adelaide. Proceeds from this event help to benefit Food Share, Ventura County’s food bank. Get the low down and ticket information at www.tequilaandtacomusicfestival.com.

“An American Season” is the theme this year for the Ventura Music Festival which is underway at several locations around town; the full itinerary and ticket information can be found at VenturaMusicFestival.org; I’ll be taking in Perla Batalla on Friday July 21 (sold out) and Simply Three on Saturday, July 22. I’m really looking forward to attending my first concerts at the Ventura Performing Arts Center too!

Summer just wouldn’t be the same without Music Under the Stars at the historic Olivas Adobe on Saturday nights. Many of these shows sell out so be sure to find out before you head over hoping to buy tickets there. The City hosts the extremely popular “The Swing Kings” on Saturday, July 22 and then “Steely Jam” on Saturday July 29. Call the City of Ventura during regular business hours at (805) 658-4726 for ticket availability.

We’re just days away from the Ventura County Fair opening and with it another fun line up of musical entertainment on the Grandstand stage. There’s a wide array of genres from disco with KC and the Sunshine band to modern country and Wynonna and the Big Noise. All concerts are included in the price of admission to the fair. I hope to catch several of the acts this year including Sugar Ray (I had the privilege of interviewing Mark McGrath years ago), and Shinedown who have had eleven number one singles on the Billboard Magazine rock charts (third most of all time behind Van Halen and Three Days Grace).

I have to say that I’ve been having fun on my radio show and playing so much great music from local artists. I love it when I can play relevant tunes from events happening, like playing a set of bands playing at Surf Rodeo (Raging Arb and the Redheads, Birdbrain, 50 Sticks of Dynamite, Rey Fresco and All-a-Blur), music from artists participating in the Ventura Music Festival (Simply Three rock!), and I’ve even been playing tunes from bands playing this year at the Ventura County Fair (KC & the Sunshine Band, Shinedown, Sugar Ray); but I’m always looking for more music to share. Please drop me a line if you have any suggestions! “The Pam Baumgardner Music Hour” airs Tuesdays 5-6 pm with rebroadcasts on Friday at 5 and again on Sunday at noon on KPPQ-LP here in Ventura at 104.1 FM. 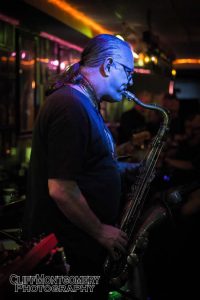 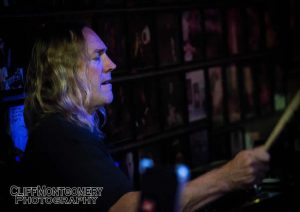 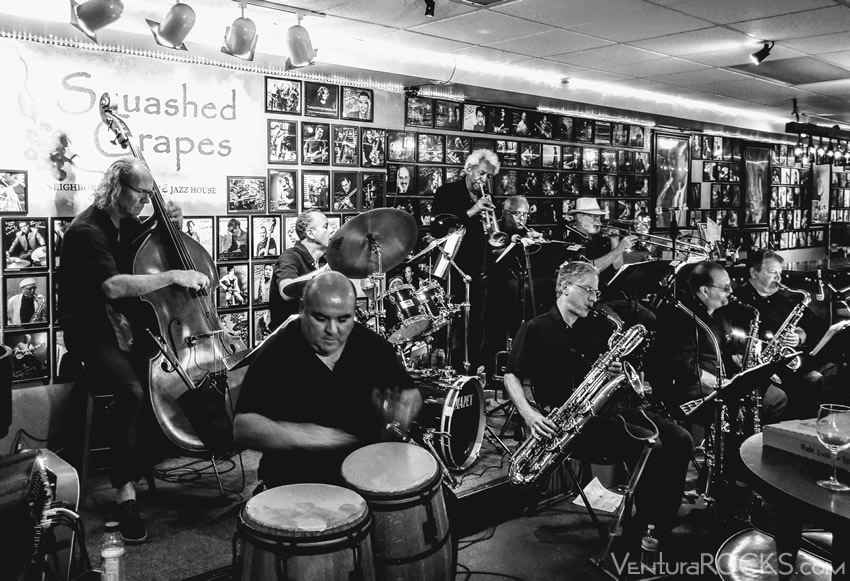 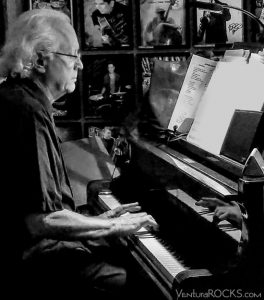 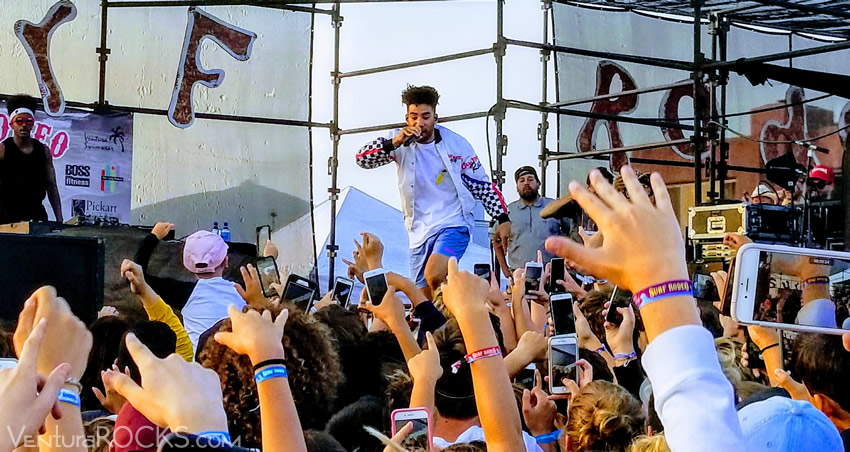 Raging Arb and the Redheads 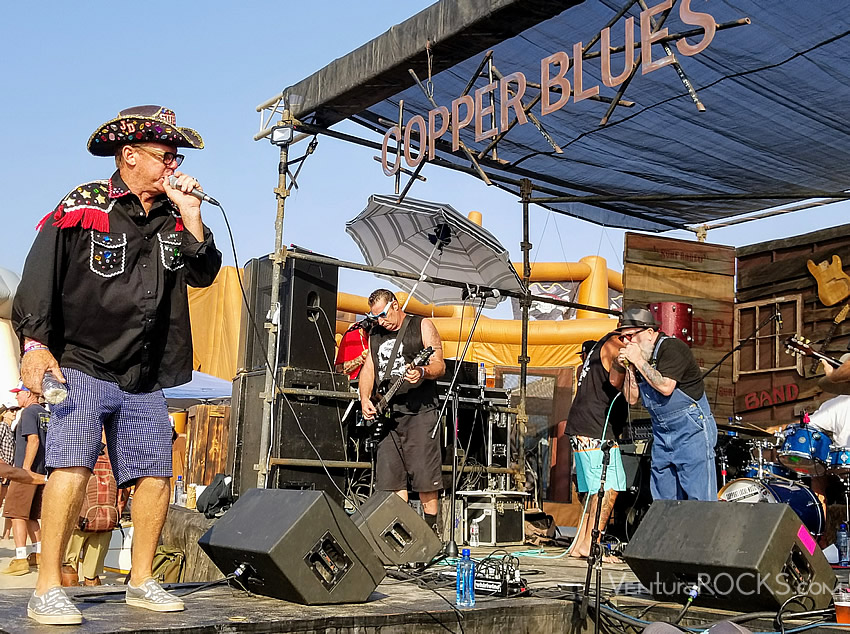 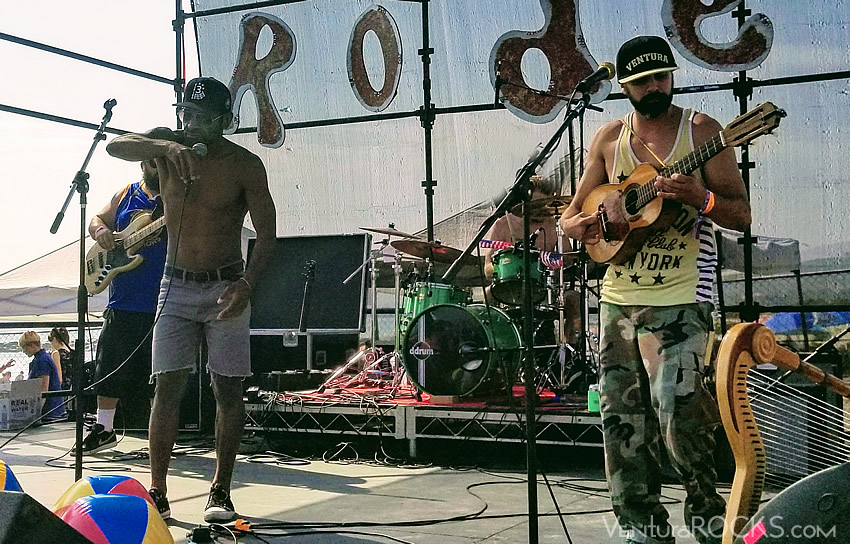 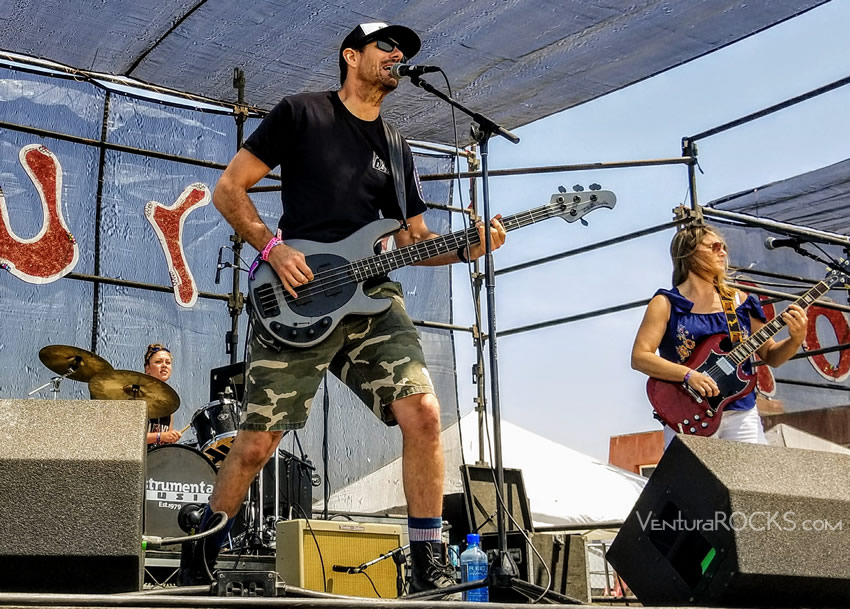 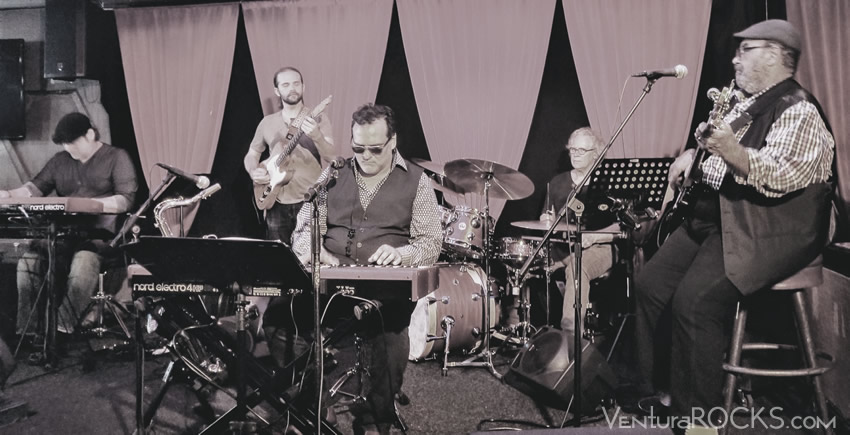 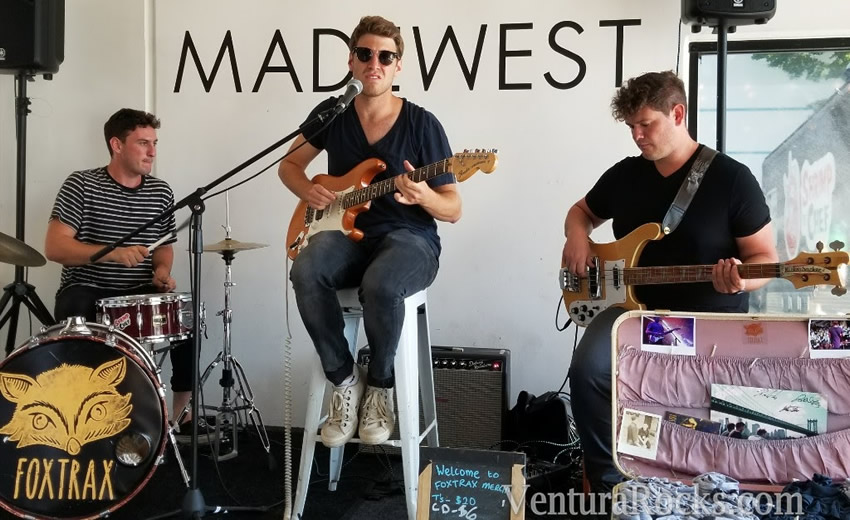 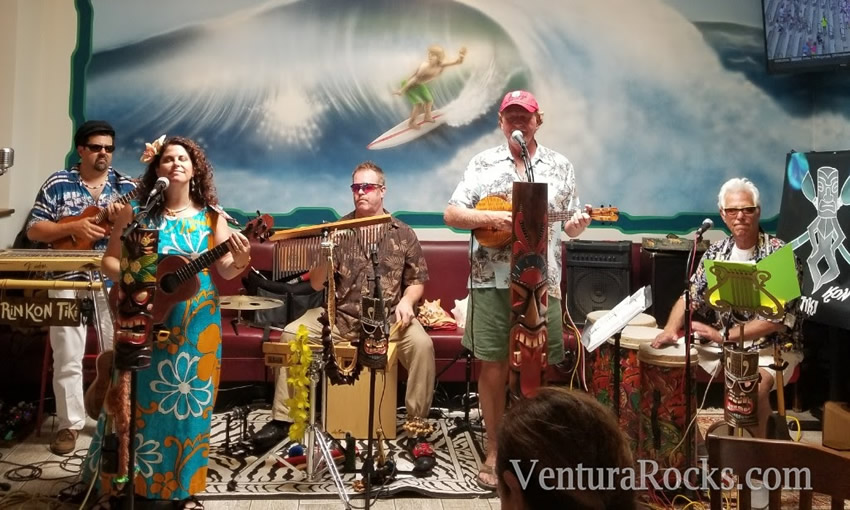 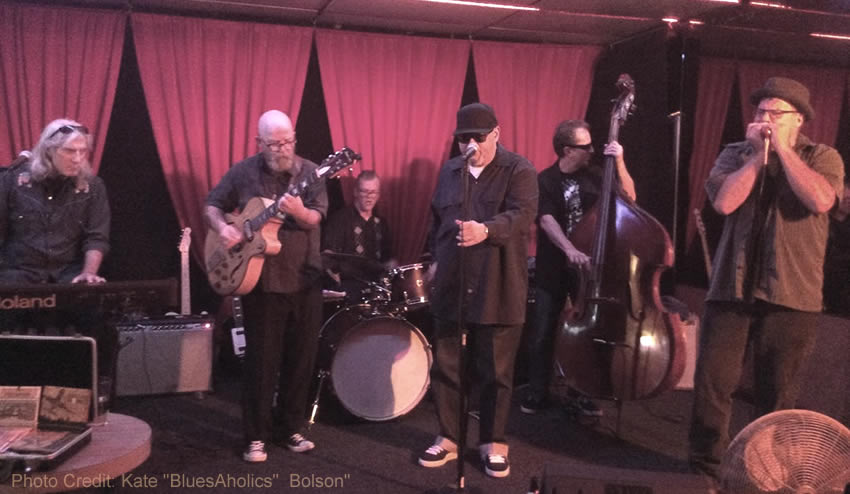 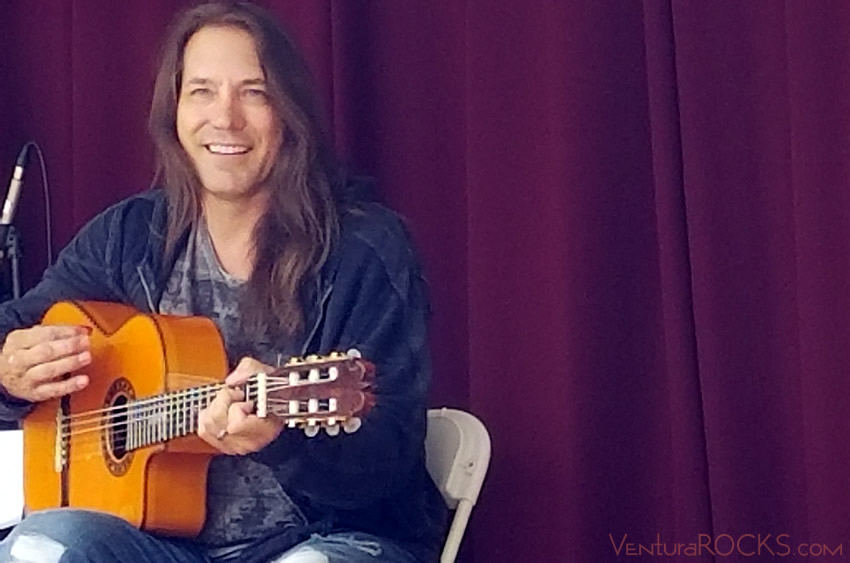 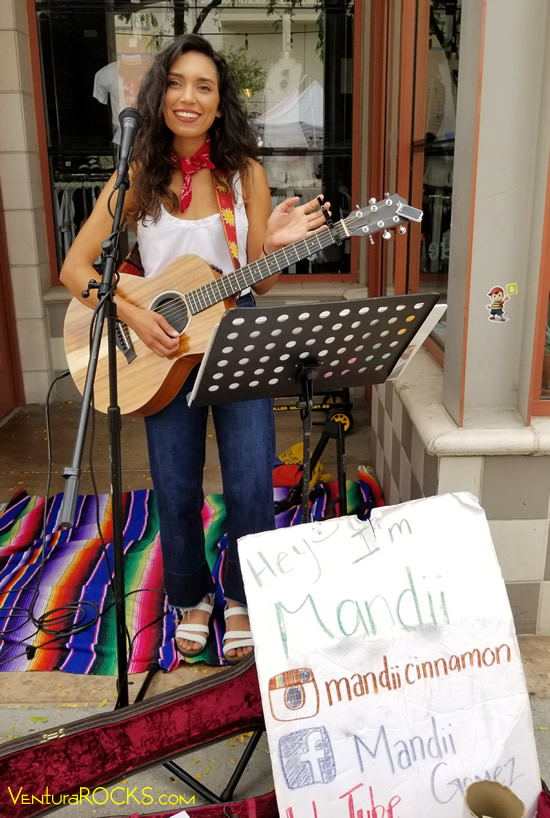 YAY!!! It’s time for Surf Rodeo with two days of fun in the sun at the beach and featuring not only a surf competition, but cool bands playing on two stages over the weekend of July 15th and 16th. There will be tons of music featuring artists like Rey Fresco, Thee Commons, Stoneflys, 50 Sticks of Dynamite, Bird Brain, The Rouse, Honey Owl, Mariachi El Bronx, and Super Duper Kyle who will be performing on Sunday (he’s been selling out shows in Chicago, Detroit, etc…). Be sure to swing by the VenturaRocks.com and Ventura Breeze booth on Seaward while you’re out having fun and say hello!

You won’t want to miss Women in the Round, “Voices”, at the Bell Arts Factory on Saturday, July 15 with performances from Andrea Landin, Michelle Rosenblum (aka Melody Bird), Donna Lynn Caskey, Shelby Figueroa and Amber Bassett. Show starts at 7 and it would be awesome of you to make a donation at the door to support their efforts.

Throwing Oxnard some love, the Collection at River park is offering free summer concerts on Thursday nights beginning with Dirty Rice on July 6 followed by Led Zepagain on the 13th, and Southbound and Company on July 22.

Congratulations to Jan for opening her third restaurant (she also owns Prime here in Ventura), this one is right smack dab in the middle of downtown Ventura at 391 E. Main Street. She named it Casa Bella and will be providing live music three nights a week: Tuesdays with Adam Tunney and “Rat Pack” type music, Encore on Fridays with R&B Motown sound, and cool jazz on Saturdays with Ricky Williams. All music is expected to get underway by 7 pm.

Quick notes: The Queens of the Stone Age concert at the Ventura Theater has been canceled, Kelly’s Lot is opening for Junior Brown at the Canyon Club on July 9, Music Under the Stars kicks off their summer concert season July 15 at Olivas Adobe with WhosNext; Tim Curran and The Brambles will be at Beach House Tacos on the Ventura Pier, Sunday, July 16 4-7 pm; and finally the 2017 Ventura Music Festival kicks off their “An American Season” featuring 23 performances this year including Perla Batalla’s tribute to Leonard Cohen on Friday, July 21, and Simply Three on Saturday July 22 at Ventura College Performing Arts Center, all of their events and ticket information can be found at VenturaMusicFestival.org.