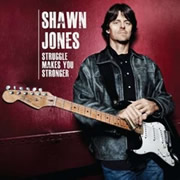 I’ve been going out and catching Shawn Jones’ shows for a few years now.  To be honest, I get a little antsy when he’s out on the road touring.  I don’t want to begrudge others from enjoying his shows and becoming fans,  but I love that he’s been calling Ventura home and that we get him more often than others around the world.

That being said, obviously, I love Shawn Jones.  His music just does something to the inner workings of my body and soul.  It’s a physical thing, and a spiritual thing and he does it quite effortlessly.

Having Waylon Jennings as a early mentor puts you on the right path for originality; Shawn learned this lesson well.  Only the truest blissful sounds this man makes has to be born from within and he really holds true on his latest “Struggle Makes You Stronger.”

Original tunes through and through, Shawn  really shines on his fifth release which was produced by Shawn Jones, Jeff Silbar and Joe Baugh at Brotheryn Studios in Ojai, CA.  I’d be lying if I said I didn’t have favorites, but I can’t help myself!  What a great line in the opening track, “Life is for the Living,” “I went out to see an old friend, laid to rest last Saturday.”  The man just has a way with words, and his music is so infectious you’ll find yourself grooving and learning the lyrics and singing right along with Shawn by the second time through.

The title track, “Struggle Makes you Stronger,” is another favorite as is “She Don’t know (’bout her own Mojo),” which is funky, down and dirty; Shawn has some serious fun on that one.  “Day with Rain” soothes the soul, where “Runnin’ Water” raises you up and makes you want to take on the world.

And one more thing…Shawn has got the sexiest voice hands down.  You can quote me on that one.

Get yourself some Shawn Jones, “Struggle Makes You Stronger.” 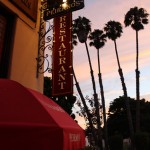 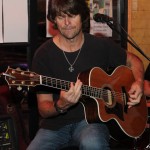 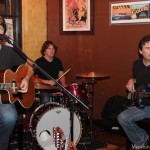 Shawn with the band 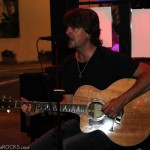 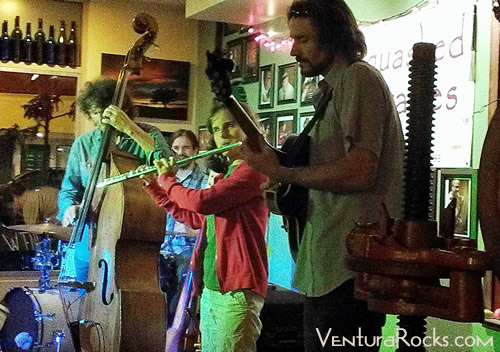 This past week alone reminds me yet again of how much I love this music scene here in Ventura.

Thursday night I cruised over to Squashed Grapes for what I knew would be outstanding jazz. I love that I can just show up, order a great Italian sandwich and Josh and Adam will make sure I’m taken care of. They told me a little about their crop about to be harvested and how they’d be doing it with some help from friends after hours – all night – Friday night.  Crazy!

In any case, as you probably already know, the jazz scene in Ventura is notorious for changing of members and adding new faces so you never know what you’ll get.  But with certain musicians, you just know you’re in for some solid jazz; and so it is with Hans Ottsen and Adam Clark. The Facebook invite named the band Tico Trio with Randy Tico who plays a standup bass, Ottsen & Clark. It also stated that they’d be playing Tico, Hermto, Airto, Miles, and Pink Floyd.

The night was amazing as they had the extremely talented Rachel Flowers join on several songs playing the flute. Flowers, blind since she was a baby, fit in like a glove and the crowd was thoroughly enthralled. Her smile was contagious and her skills amazing.

The trio played as if they’d been playing together for years.  They were tight, in the zone and incredibly hot; but you know, you get that with this caliber of musicianship. And yes, the Floyd was worth the wait.

Spencer with Nate and Cougar

Friday night was all about Spencer the Gardener.  I was given a head’s up a few weeks ago that Nate Birkey would be sitting in with the band.  That just did not compute! The Nate Birkey Quintet out of New York City playing with our beloved Spencer and all his quirkiness? (Turns out he was an original member way back when…)  OH MY GOD!!!  What a night.  AND THEN, Cougar Estrada on drums???  The combination of Nate and Cougar had Amigos hopping well into the night and seeing such world-class musicians tearing up in our local Amigos on Main Street, well, like I always say, Ventura ROCKS!

Saturday night Shawn Jones has a gig at Yolies, and Zoey’s has Omar Velasco & Shane Alexander who will be sharing the stage with special guests Neal Casal & Jesse Siebenberg. But then there’s Big Tweed at The Tavern, Porterhouse Bob at Olivas Adobe, D.on Darox & the Melody Joy Bakers at Bombays…Geez!

Would it make a difference on the venues and festivals and events you attended if you found out the bands were not being compensated?  Or that they had to pay to play?  Or that they were not paid what was promised?

Of course it would.

But would you also want to know about which venue promised “X” amount of dollars and they made “zilch” for the evening losing money because the band did not pull in anyone?

It would be easy to say it’s Venues vs. Musicians, but it shouldn’t, because this is a collaboration, or more concise an exchange.  The musicians play for compensation.  The venue hires the musician to make more income (than without the musician) so they CAN compensate the artists and have an ideal setting for their patrons.

So there has to be a mutual responsibility. The venue promotes, but the band has to do so as well.  But more important is whether all the promotion is fruitful in the end. Did people show up?  And did they spend money?

Just as the musician rightfully should be paid for his work, the venue can’t expect to be a charity, paying for artist who bring in diddly squat; which is why the people who book bands have an obligation to the owners of the venue (they are sometimes one and the same) to not take chances with unknown bands.

The economy has improved but it certainly has not fully recovered.  Rent is high!  Venue overheads are insane!  Add to that an entertainment budget and you start to understand how fortunate we really are; it’s taken for granted that music will be available because we have such an abundance here in Ventura.  From the Harbor to the East end of town to Downtown Ventura and, on most every night of the week, we have live music.

In an ideal world, venue owners would love to pay their musicians top dollars while making a profit.

In a not-so-ideal world, venue owners take advantage of musicians and use them to get more people in the door so they can make a profit, yet have no intention of compensating the artist their worth (if at all).

In a sad world, venue owners and promoters require bands to pay to play and then make much more money at the door…because people want to hear those bands play.

I also realize that not all venue owners are the best business people. Their rent and overhead are almost prohibitive to allowing an entertainment budget, yet they continue to provide music, because they believe in this music community.  Bands play for them because they want to “support” them back.

So it’s not always black and white on the issue of whether a band should play for free once in a while, or whether a venue can pay what was promised.  It’s easy to be a Monday Morning Quarterback, but unless you’re in the trenches trying to make a living, (as a venue owner or a musician), then it’s really not altogether fair to say what’s right and what is wrong in a broad general statement.

The ongoing debate on whether musicians should play for free may continue, (especially the newer bands paying their dues undercutting experienced well-known musicians out of the equation), but what can you, as a music lover do to help our music scene thrive?

Loosen your purse strings and support the venues and events who pay their musicians. Buy dinner there; pay the cover charge; get a late night snack, or buy a round of drinks (soda counts!). This is how venues stay in business.  It’s not rocket science!

We do our best to get out and support our venues at least two to three times a week…on top of keeping VenturaRocks.com updated daily and posting on Facebook hoping to inspire others to do the same.   And I see so many of the same groups of friends supporting already!  So my intention is to NOT preach to the choir.  You know who you are and whether you’re already supporting.  LOVE YOU!!!

We have over 50 businesses in Ventura alone which offer music occasionally, and at least 35 who offer music every single week!  Crazy!!

So in the end, you’ll ask yourself, did you help?  Did you take some responsibility in making this town a great music community?

Let’s spread the love, and continue to support our music scene because it really comes down to just that.  We can all help alleviate the problem of artists being underpaid by supporting the venues who do pay for musical entertainment. Get out and be willing to spend money to have live music by extraordinary musicians.

Let’s keep this scene alive, because I truly believe today more than when we started this thing, that Ventura Rocks!!!