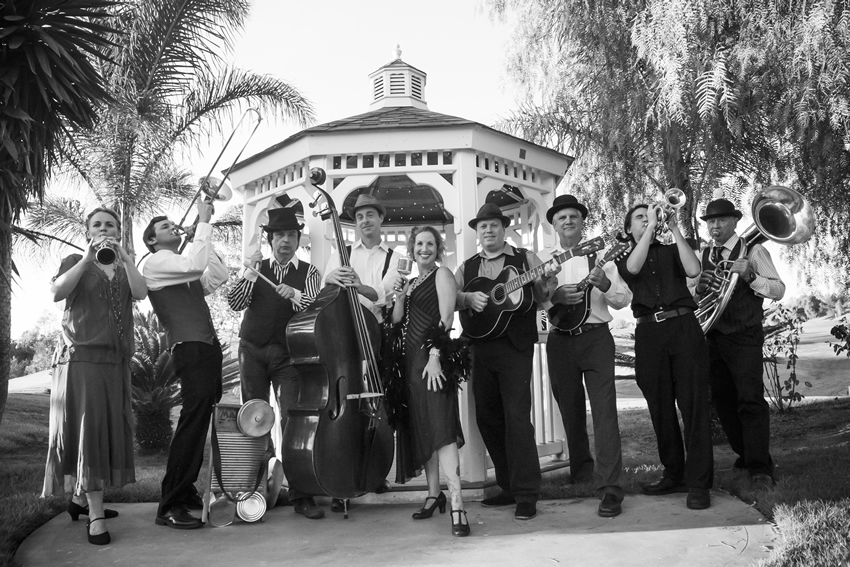 Ventura certainly rocks, and it’s been officially rocking for 150 years as of April 2, 2016. In honor of its major milestone, The City is celebrating with a free family fair and picnic at Plaza Park. Along with carnival games, activity booths, races and contests, an historic treasure hunt and a truly affordable old fashioned-barbecue, there will be live music with The Swilly’s, Ventura Jazz Orchestra Sextet featuring the vocal stylings of Donna Greene, The Barrelhouse Wailers and the Mighty Cash Cats.

And then, in conjunction with celebrating The City’s 150th anniversary, Ventura Education Partnerships will feature a concert with hometown heroes, Big Bad Voodoo Daddy at Mission Park. Tickets range from $25 and up to benefit music and arts in our schools.

Robert Ramirez and Michelle Votrian just returned from SxSW (annual music festival and conference in Austin, TX), so I asked Ramirez what made them decide to make the trek and he told me, “With friends out there, we just needed a show. Then we were invited to perform at Leeann Atherton’s Full Moon Barndance which is considered by the locals, the unofficial close to SxSW and a tradition, with non-stop music and food for 8 hours; it’s the place to be on Sunday. Every artist and band that played was a working band, some from Austin, some touring and some from Europe and Australia. Except us!”

The other evening, I dropped into Squashed Grapes to catch Mark Schulman’s set; he had put on an inspirational drum clinic in conjunction with Pulse Drumming before the show. Schulman is currently Cher’s drummer and has toured with Pink and others. He brought with him Eva Gardner on bass (Pink, Mars Volta, Cher) and Julian Coryell (Alanis Morissette, Carole King, Jewel) on guitar and vocals. The house was rockin’ a tad bit more than usual and I have to say, I thoroughly enjoyed it! In April, make plans to catch the return of Doug Webb with Danny Carrey of TOOL on April 2, drummer Joey Heredia (Stevie Wonder, Sheila E, Sergio Mendez) on April 16, Sandra Booker (Harry Connick Jr is quoted as saying, “her voice was made for jazz.) on April 23 and Frank Potenza and Friends return on April 30.

And staying with jazz for just a bit, the California Jazz & Wine Fest will be held on April 17th at the Four Seasons Hotel in Westlake Village with the Tom Scott Quintet, Doug Webb Group and several of our local musicians including the Barrelhouse Wailers.

There will be a benefit concert for the Mare Louise Foundation on April 9 at Sandbox Coffeehouse featuring local artists, Marianne Turner, Xocoyotzin Moraza and Devin Johnson.

And finally for rap fans, don’t miss Tyler the Creator at the Ventura Theater on April 2. 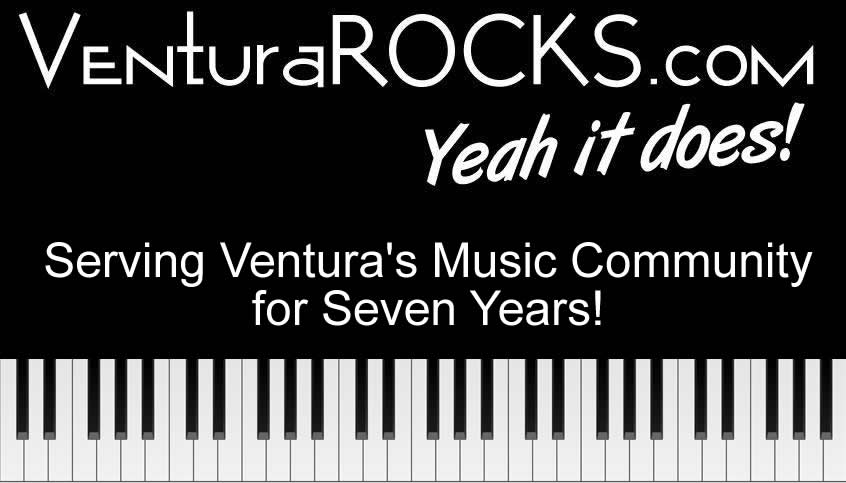 For no other reason other than the website was ready to roll out, VenturaRocks.com was launched seven years ago on St. Patrick’s Day. We started out as a comprehensive calendar of music listings for Ventura, but quickly branched out by further covering Ventura’s music scene with photo galleries, interviews, and reviews. Then Sheldon Brown asked me to write a music column for the Ventura Breeze which I’ve been doing for a little over two years now; and most recently, CAPS Media invited me to host a music program on their cable channel which has turned out to be a whole lot of fun. Watch out for the next episode to air soon featuring 50 Sticks of Dynamite. It’s been a blast and I’m looking forward to another year serving Ventura’s music community at www.VenturaRocks.com.

There are a number of fundraisers coming up that I hope you’ll consider supporting. On Saturday, March 19, there will be a benefit concert at Bombay Bar and Grill for The Turning Point Foundation. After the devastating loss of Diego Hinojosa last Fall, Diego’s family and friends wanted to make sure others are aware of mental health resources available at this non-profit facility. Scheduled to perform between noon and 7 pm are Xoco Moraza & Tomas Herrera, Jackass, Crooked Eye Tommy, The Hymen Blasters, Legalizer, After the Smoke and Rey Fresco. Suggested donation is $20 for adults and $10 for kids.

The following afternoon, March 20 at Discovery, the annual Key to the Highway fundraiser will be held starting at 3 pm with a full line up stellar musicians including Guy Martin, Hoo Doo Hounds, 50 Sticks of Dynamite, Kelly’s Lot, Brian McCann, Steve and Sally Williams, Jon Gindick and more including the recipient of this year’s fundraising efforts, Ashford Gordon who is battling prostate cancer. The evening will end with an all-inclusive jam hosted by Doug Johnson. Tickets are only $10.

Surf Rodeo has started announcing their band line up for this year’s summer event and I was pleased as punch to hear Dave Wakeling and the English Beat will be on the line up. Surf Rodeo will once again take over Pierpont Beach on Seaward from Pierpont Blvd to the ocean the weekend of July 16th and 17th.

The Rubberneck Lions announced a Taiwan tour which caught my attention. I asked drummer Jaison Pearce Henderson about why they were heading to Taiwan, and he told me, “We have some Silver Strand friends who have moved to Taiwan and have made it easier to independently plan and fund a tour there. We were selected to play Taiwan’s huge Spring Scream Festival and the rest of the shows we booked around it.” 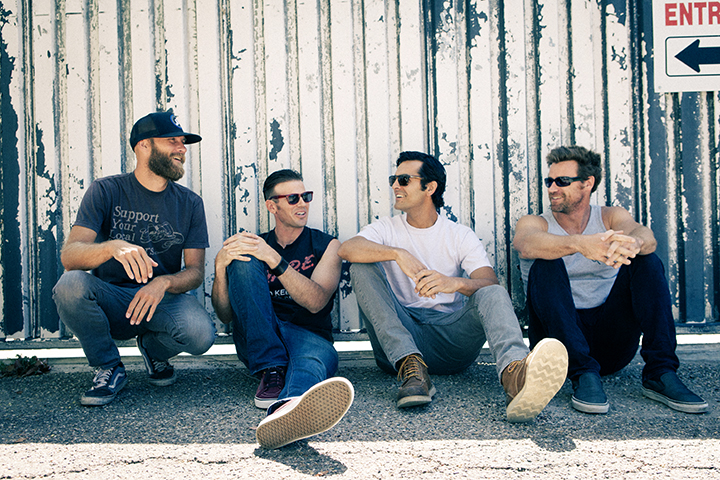 winchester Rebels opening for Puddle of Mudd at Discovery

I’m looking forward to the Puddle of Mudd show coming up at Discovery on Saturday, March 5, word has it former bass player Michael Anthony and restaurateur of Now Ventura will sit in for a few songs. Let’s hope singer Wes Scantlin is on his best behavior and keeps it together and keeps it live. To kick off the evening, one of my favorite Santa Barbara rock bands, The Winchester Rebels will warm up the house so be sure to get there early enough to catch both acts.

You know the party will be off the hook at Bombays when Hy Brasil performs while celebrating their bass player, Shawn Echevarria’s birthday on Friday, March 11. The Pullmen will open with a special performance from San Diego’s Mrkts.

Rebulation returns to Ventura for back to back shows at the Majestic Ventura Theater on March 12 and 13. Why two nights? Because they always pack ‘em in!

The 10th annual Ventura Music Festival Jazz Competition takes place at the Pierpont Inn on Sunday, March 13 at 1 pm. Get out and support up and coming young jazz musicians. This event is free to the public.

Tickets have been selling briskly for the Big Bad Voodoo Daddy fundraiser concert in conjunction with the 150th anniversary celebration of the City of Ventura. All proceeds support art and music programs for Ventura’s Unified school district students. Be sure to secure your tickets and help keep music in our schools. Go to CelebrateVentura.org for more information on how to get your tickets online. They’re also available at VSUD school sites.

Ventura’s punk scene continues to thrive, The Dickies, Ill Repute show at the Garage sold out. More shows have been popping up between The Garage, The Red Cove, Sans Souci and Bombay’s. You can get the low down at VenturaRocks.com which has you covered Punk to Jazz.

Speaking of which, VenturaRocks.com celebrates its anniversary this month servicing the music community in Ventura for the past seven years; it is the best online resource for keeping up on where to find live music.