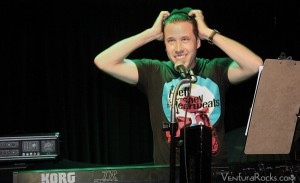 One evening taking in music around Ventura I came across Owen Bucey performing a solo set at Bombay’s.  Owen of course has played keyboards for Army of Freshmen since day one.  I hadn’t seen him perform solo before, so I was impressed. Jeff Hershey was in the crowd and encouraged me to check out one of Owen’s “other” project The Calamity.  Less than a week later I found myself sitting down with Owen on Main Street at Palmero’s talking about Army, Calamity and the the music scene in general.

Honestly, the tape ran much longer than what you see here, as we got off topic more times than not just talking about Ventura’s music scene which we both love! But here is the spliced down version of our conversation.

Ventura Rocks:  How did The Calamity originally get started?

Owen Bucey:   Calamity was a project that got started with Kai, Aaron and myself when we were touring on the East Coast in Jersey around 2004/2005.  We just hung in one night when everybody was going out and we were staying at Chris’s folk’s house.  They live in a place in Cape Main.  His mom’s a music teacher so they have a piano room and we were just messing around, drinking beers and whatever; and we just put it together. It was just sheer organic fun.  We loved what came out of that night and decided to explore it a little bit more.

VR:  How was the experience different from Army?

Owen:  In Calamity everyone was on different instruments, except for me, but I was starting to write lyrics which was a new experience for me. 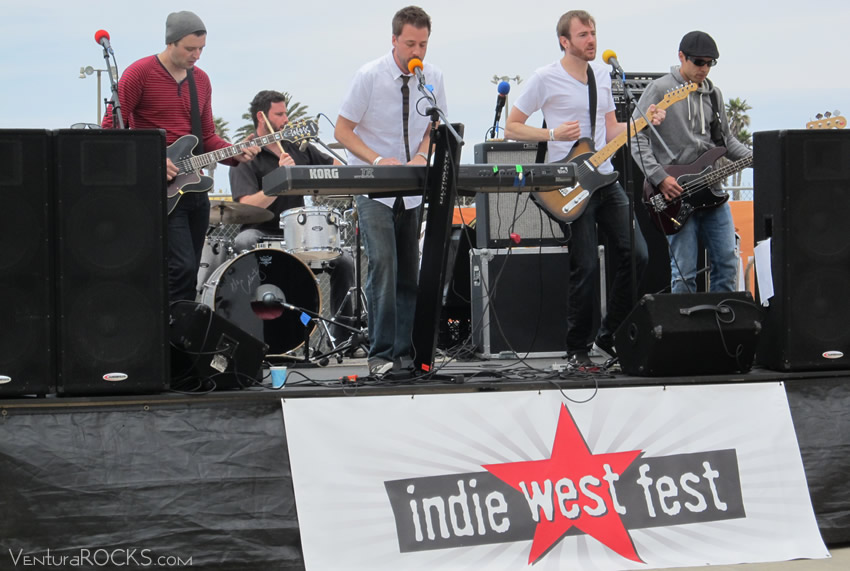 VR:  How soon did you realize you had enough for an album?

Owen:  We’d meet up occasionally to keep it going.  We took baby steps, you know?  We’d record a couple of songs with someone. But we finished a full length record in 09 and put it out on Missing Words label (The Return, Matt Marten’s label).  It was cool, because he did a real push and even got us on college radio.  We played a couple shows, but we continued to write more.

VR:  And the rest of the guys?

Owen:  Balt joined right before we finished Songs from the Gold Coast (the record that came out in 09.)  Some of the songs were done, so he contributed to some of the songs on bass. But we were always like a three piece, just Aaron, Kai and myself.  We basically wrote almost a full record like that, then Balt came in and we added three or four more songs for a full-length.  Phil was added after that for more texture and guitars.  We’re all from the same circle of friends and bands; it was a chance to jam out and get something with a little more guitar texture so it doesn’t end up being too Ben Foldsy, straight up piano pop. 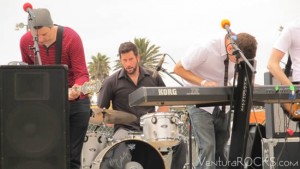 VR:  And how was that writing?

Owen:  The songs that were coming out of me were about what was going on in my life at that time, relationship stuff, marriage stuff, it was difficult, the economy, everything.  So it was little more moody, so it was cool to have those other elements.

VR:  And you got out and performed?

Owen:  Yeah, when Phil came in, there was like an injection of passion, which was cool because he was all jazzed about doing some shows, so we organized some more and and this was all going on at the same time as whatever Army of Freshmen was doing. So we’d run around with Freshmen and go out on a trip for a week, then come back and have a show here and there with Calamity.  We just coordinated everything with our off days.

VR:  And what about the marketing of Calamity?

Owen:  Well the cool thing about this, is that nobody really cared about whether or not it took off. It was all about just playing music, and writing songs.  But we were real proud of it. It was always great when we had an opportunity to perform it.  And we had some cool opportunities like when we got invited to play with Camper Van Beethoven’s camp out which they do every year at Pioneertown. 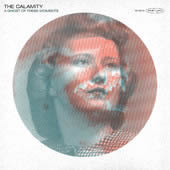 VR:  When did you guys decide to cut a second album?

VR:  Who produced it?

Owen:  The Calamity and Armand Tambouris

VR:  What are you hoping to achieve with A Ghost of These Moments?

Owen:  We wanted to achieve a more organic and raw sound with real instrumentation. The songs were a natural and personal culmination of the previous year. Something we can always be proud of. No agenda really

VR:  How did the idea to cover the album start to finish at the show at Bombay’s on March 1 come about?

Owen:  We liked the idea of making the show a one time event. Give the entire concept of the album in one fell swoop.

VR:  Is there anything else you would like to say about the project?

Owen:  Basically, the Calamity has always been about the music. Trying out new things without trying too hard, and playing with friends.

See VenturaRock.com’s music review of A Ghost of These Moments