There are a couple of festivals landing at the Ventura Fairgrounds soon. The incredibly popular Skull & Roses will run April 7 – 10 with Phil Lesh & Friends, Dark Star Orchestra, Oteil & Friends, Melvin Seals, and more performing. I spent some time on the website trying to figure out all the different options from daily tickets, to camping and which bands play which days, and then…I gave up. But if you’re the forever Grateful Dead fan, then you won’t mind figuring it all at SkullAndRoses.com

But before the deadheads descend on our fine city, the punk rockers will have their day on Sunday, March 27 at the Punk in Drublic festival. Ventura’s date features performances from NOFX, Pennywise, Face to Face, TSOL, Lagwagon, Ill Repute and more. Per the easy-to-understand website, this event was created from the mind and livers of NOFX’s frontman, Fat Mike, and craft beer fanatic/festival promoter, Cameron Collins, and they’ll be traveling across the US and even making stops in Europe. Get ticket information at PunkInDrublicFest.com.

Madewest Brewing Company is celebrating their sixth anniversary on Saturday, March 26, with live music from Ghost and Ghouls, RJ Bloke and Milo Sledge at their brewery/taproom location at 1744 Donlon Street in Ventura.

Night Demon will be playing a hometown show to finally celebrate the release of their Year of the Demon album as well as their new beer, Beer of the Demon at Casa Agria Specialty Ales in Oxnard on Saturday, April 16. Tung will open.

The Ventura Music Festival added Twanguero for their 27th season; secure your tickets for the April 9 concert at the Ventura College Performing Arts Center through VenturaMusicFestival.org;

I’m looking forward to reporting on the grand opening of the Ventura Music Hall on my next column…but meantime, they are open for business! See listings below.

Quick Notes: Kelly’s Lot rescheduled show for Namba is on Saturday, March 26; The Ojai Underground has Lola Haag Jazz Quartet on March 26, Mike Mullins on April 1, and Phil Salazar & the Kin Folk on Saturday April 2; Tickets are on sale now through EventBrite for Buckcherry at the Oceanview Pavilion for June 4, they just released their 9th album, Hellbound; and congratulations to The Silver for taking 2nd place in Rock the Valley battle of the bands guaranteeing them a slot in the summer concerts in the park this year;

The Pam Baumgardner Music Hour welcomes Mary Z Wilson to the program with a segment featuring three songs of Mary’s choosing along with a little background and history on each act. The current show features Julie Christensen, Phil Salazar and the Tatters. The program airs on CAPS Media’s KPPQ-lp at 104.1 FM in Ventura, or online at CapsMedia.org/Radio and airs Tuesdays and Fridays at 5 pm and Sundays at noon.
Do you have any music-related news or upcoming shows you want help publicizing? Please send all information short or long to Pam@VenturaRocks.com, and for updated music listings daily, go to www.VenturaRocks.com.

Ventura Music Hall is still on track for their first show on March 22 with G. Love & the Juice and what an incredible first band to have on their docket. You’ll want to bookmark their website (www.VenturaMusicHall.com), all the dates are listed with links to secure tickets, which I highly recommended you do, sooner than later, as dates are selling out even before they open their doors. They’re offering a variety of acts from up-and-coming indie artists to Rock and Roll Hall of Famers (Don Felder of the Eagles), and offering all types of genres from Soul to Country and most points in between. 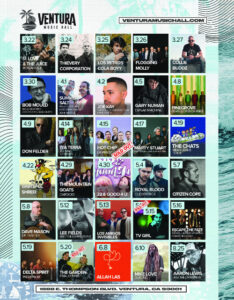 There’s Bob Mould with a successful solo career after Husker Du in the 80s; it should be a house party with Thievery Corporation, electronic, music duo; Celtic punk rockers Flogging Molly will keep you on your toes; there’s Dave Mason who continues to tour with over 100 a shows a year (when there isn’t a pandemic), and who, for crying out loud, wrote “Feelin’ Alright” when he was in Traffic; there’s Country and Bluegrass artist Marty Stuart, who you may or may know toured with Johnny Cash’s road band many years ago, and that’s just a handful of the artists already lined up.

I got a tour of the venue last month, gone are the bowling lanes, and it’s all about bringing even more music to town as well having another outlet for our trove of local artists to play. The kitchen will offer food, there’s a full bar and the staff are super excited to be a part of our community…I have no doubt, they’re going to fit in just fine!

And then there’s yet another one of those not-to-be-missed shows at the Grape with the Jerry Vivino quartet on Saturday, March 12. You most likely know Vivino’s sax work as a member of the Conon O’Brien Show’s band, but he’s played with Springsteen, James Taylor, Donald Fagen, Branford Marsalis and others. On drums will be Bernie Dresel, multi-Grammy award winning artist who not only performed and recorded with the Brian Setzer Orchestra and Gordon Goodwin’s Big Phat Band, but his work can be found on such soundtracks as Whiplash, Incredibles 2, Mission Impossible III, and the Bourne Supremacy.

Quick Notes: congratulations to Steve and Sally Williams on the release of their CD, Borrowed & Blues; Relm Wine & Beer Bistro is now called Onyx Bistro and they’ll continue to host singer/songwriters on Fridays and Saturdays; tickets are on sale now for 311’s May 12th date at the Ventura Theater; Aaron Orbit along with Rubberneck Lions and Carlism play The Six Chow House on Friday, March 11; RJ Mischo birthday bash will be held in the Blue Room upstairs next the Comedy Club in the Ventura Harbor on Friday, March 18; and Kyle returns to the Ventura Theatre for a show on Friday, March 18.