It’s business as usual now that the holidays are firmly behind us and people are getting out and about and taking in live music again. Of course, with all the lovely rain we’ve been receiving so far this winter, there could be cancellations for music held outdoors such as venues as Peirano’s or Ojai Valley Brewing. But for the most part, music is back to being played indoors again after the pandemic.

Congratulations to Michael Jay and the Mighty Cash Cats as they’ll be inducted into the California Music Hall of Fame. This relatively new organization’s mission is to recognize the many important talented music industry professionals from the legends, those behind the scenes, to the up-and-coming, who have helped shape the rich spectrum of California’s music legacy, and to educate the public about their accomplishments. The induction ceremony will be held January 28 in Temecula where other inductees include Gwen Stefani, Canned Heat, Jan & Dean, William Shatner, KOST 103.5 and more. 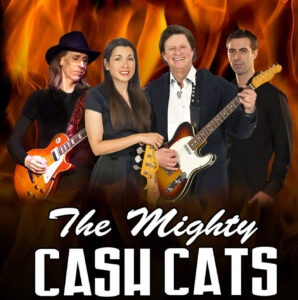 I’m happy to see that Hi Hat Entertainment is getting back in the game as they’ll be helping to produce upcoming shows at the Oxnard Performing Arts Center. The first one on the docket will feature the Delgado Brothers on Saturday, January 14 and then it’s Teresa James and the Rhythm Tramps on February 11.

Ventura Music Hall continues to line up a number of diverse acts. This month’s shows include Zoso (ultimate Led Zeppelin tribute) to Steely Dead (think the Grateful Dead meets Steely Dan), to Cut Chemist (American DJ former member of Jurassic 5 and Ozomatli). Looking ahead to February, you might want to secure tickets to the BoDeans, Alborosie, Hirie, Dave Alvin & Jimmie Dale Gilmore (rescheduled), Fidlar, and Melvin Seals & JGB; but, my money’s on The English Beat whose biggest hits include “Mirror in the Bathroom,” “Save it for Later,” and “I Confess.” I’ve always been a big Dave Wakeling fan, I think the first time I met him was upstairs at Nicholby’s back in the day.

Quick Notes: The Rocketz, the Ripkats and Ghost Town Hangmen play the Sewer on Friday, January 13; Out of Trust record release party will be held at Casa Agria Specialty Ale in Oxnard on Saturday, January 14; Bluegrass favorites, the Storytellers play the Deer Lodge on Saturday, January 14; get your swing on with the Swing Shift Big Band on Sunday afternoon, January 15, at House of Dance in Ventura; French pop rock band, Phoenix, plays the Majestic Ventura Theater on Monday, January 16; Sean Bonnette & Tim Kasher paly the Ojai Women’s Club on Thursday, January 19; and Barrelhouse Wailers celebrate 10-year anniversary at the Grape on Fri, January 20.