The City and surrounding areas are still not allowing live music in venues, not even outdoors unless it’s one of the drive-in style and you’re in a car, or at least next to your car in a parking lot. Concerts in Your Car in the fairgrounds parking lot continue to add shows including Robby Krieger of the Doors, the Dirty Heads and Cypress Hill.
The Canyon at the Oxnard Performing Arts Center (parking lot) seems to be focusing on tribute bands with the exception of a punk show on the 19th. They’re calling them Carpool Jam Concerts with tribute bands featuring the music of Metallica, Madonna, Journey, Doors, Billy Idol and more.

Q&A with Dan Grimm – EP: Before the Floor

I’m always jazzed to hear local artists have new music they’ve been working on and have a new CD or EP to share; such is the case with Dan Grimm and his new EP called Before the Floor. As co-owner of Carbonite Sound out of Ojai (along with Jason Mariani), Grimm not only has some amazing resources, and contacts, but yes, talent, and I would be remiss if I didn’t mention his dry sense of humor.

Pam Baumgardner: This is your fourth release after Average Savage, Ventucky and Corvus Crow, correct?

Is there a backstory on the EP title, Before the Floor?

Dan: Yes! There is a story to Before the Floor aka “Before the floor so rudely interrupted…”
Dave Palmer was playing the Vine in Ojai, and a bunch of friends and musos were hanging out, as was the former owner of one of the all time great Old School Ojai gourmet restaurants. He’s an 70-80 year old gentleman and has never lost his elegant french accent. He was clearly flirting heavily with a random young lady and frankly to our surprise, he appeared to be captivating her. I remember his teeth had the tale-tell wine purple coting and he was clearly the jovial throws of a few bottles of something nice. We were right next to him and young lady at those standing tables when he blacked out and dropped like a brick. With a little help up he was quickly back on his feet and to my great surprise uttered “So, as I was saying before the floor so rudely interrupted me” and went on as if nothing had happened at all. That was one of the all time great spontaneous lines I’ve ever heard and I knew I had to make a musical painting of that incident.

How would you say you’ve grown, or evolved? First with your songwriting, and then with the recording process. 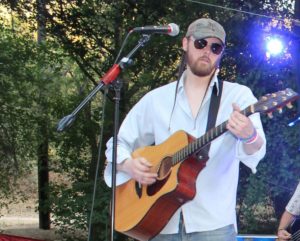 Dan: Songwriting growth is tough to answer. There are those songs that the universe writes and you are a passenger for, and there is the crafter-grind that turns out songs through effort. The spontaneously written and finished ones are gifted to you and there is little to work on other than whatever innate melody/chord structure, and form skills have been slowly growing. The grinder songs… I guess I can say I’m writing more pointedly for purpose and delivery instead of just for therapy like you do when it’s really just for your own mind’s maintenance. So at this point, I feel like you could point me at a topic and I could likely make something or several somethings that fit the need and don’t completely suck.
Relevant to this collection of songs, though, some are very very old and the growth is the sound in studio and how I work with Dave Palmer, who continues to become more and more a main musical compadre and influence. “Space Black” was a song I liked and I wrote in college in 1999, but it took me this long to find the right composition. This version was a bunch of people in a room getting very weird and nailing something I had never been able to ask for in words before.

Tell me about the players on this EP.

Dave Palmer was the first person I asked to get involved and help produce with me. He heavily influenced the sound and within the industry he’s known to be the kind of gifted dude he was for this album and so many songs on the radio like “Feel it Still” by Portugal the Man, De La Soul, Chris Isaak, Cardi B, Bruno Mars, and more than I can even name drop. His heavy foray into movie scores was a major influence on the approach, as well. Very importantly, I also asked him to assemble the other players. His piano and synth, which are largely live, always move the song but he’s never pushy with his own parts. He had decades of songs to choose from in my library and while I knew Before the Floor had to be on this one, he had us drop two additional songs to ensure the guys had a fun day in studio, (which we did).

Matt Chamberlain was my main target for drums. He’s really hard to get and luckily just loves Dave, because I was repeatedly told only A-list cats can hope to see him show up for sessions. He’s on Bob Dylan’s new album Rough and Rowdy Ways that is garnering so much attention, and he’s been the go-to guy for Pearl Jam, John Mayer, David Bowie, Bruce Springsteen, The Who, Stevie Nicks, and the list literally goes on and on.
From the iconic snap on “Can’t All be Loves Songs” to the absolute genius on “Space Black Night,” he was everything I had hoped for and more. Jokingly, Palmer suggested he never repeat patterns on the lengthy Space Black Night cut, he said “I can probably do that, let’s try.” He then proceeded to nail it for two consecutive takes, which completely blew my mind, and one of those takes is the cut we are releasing.

Tim Young is probably most famous for having his own Queer Eye makeover as the shaggy guitar player in the Late Show band with James Cordon. He’s also been Beck’s live guitar player, and worked with Lady Gaga, Cher, Sting, Alisha Keys, Kermit the Frog, and many more. The solo on “Before the Floor” was played on his cigarette case amp, which is literally electronics installed into a single pack of cigarettes. The tone he got out of it is really cool and I had never seen one used before that.

Jonny Flaugher is a very bad man on bass. He’s got a very groovy pocket, and he can be busy without being pushy or disappear in the ether while supporting the song with a really nice low tonecraft. I dug his work with Ryan Adams and he’s also sort of the anthropomorphic representation of New Jersey. My truck door might still be holding a grudge from the after-recording celebration, but I’m already plotting to get him in on a bunch of recordings in the future and I stay in touch with him regularly because he’s a lovely guy on top of how talented he is on bass.

Jesse Siebenberg is a long-time friend and collaborator who plays most instruments better than most folks who just play one thing. He played steel guitar on “Can’t All Be Love Songs” just as he did for Lukas Nelson and Lady Gaga for the movie A Star is Born with Bradley Cooper. He is also the current lead man of Supertramp and son of Supertramp’s drummer Bob Siebenberg, as well as nephew of Thin Lizzy’s guitar player Scott Gorham.

I’m loving “They Can’t All be Love Songs,” I played it on the latest episode of The Pam Baumgardner Music Hour on KPPQ-LP. You must be super proud! Tell me the back story on this one.

Dan: This one was written in my most productive period as a writer when I was writing for the band milEs and living completely nocturnally in Los Angeles. The verses are extremely literal and true, but the inspiration came from the fact that the band’s singer and other writer basically only wrote love songs. The rest of the band wanted me to break that pattern, so I wrote a song about not just writing love songs… that I guess wasn’t really a departure from love songs, but it was an inside joke topically.

Jesse wasn’t supposed to play on the EP, but he came by for a listen and liked “Can’t All Be Love Songs” so much he wanted to sit in with the band. His lap steel parts on the solo sections were played live with Tim’s amp side by side, so they both had to nail the synchronized guitarmony parts without making any mistakes, as we could not edit the guitars separately.

This song and the whole album were live tracked, so everyone played as a live performance band instead of layer by layer. That has always felt more like music to me as I know and enjoy it, but it’s becoming the exception in the modern industry. We had a really good time recording all these songs and the day went by way too fast. Usually a day in the studio means late into night, but in this case, we took 2-3 takes per song… cut a few solos over again, added another layer of Dave in some select spots, and then went wine tasting by late afternoon. It was nuts.

Too funny!! I would have loved to be a fly on the wall for that session! So where do you find your inspiration to write songs. Is there a typical way for you? And are you always writing, or does it come and go throughout your life? 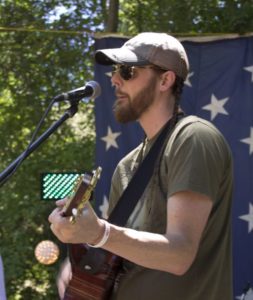 Dan: The plan is to always be in the midst of writing songs, though sometimes I don’t get whole songs so much as a line, or verse, or something that ends up being a bridge in a separate song later, or just a concept for a song or album. Inspiration comes from all over the place… the only time I’ve ever had writer’s block is when I’ve locked myself in a room to focus on writing songs for too long and actually robbed myself of outside stimulus. I try to have lots of processes to keep out of ruts. I do have a go-to strategy to drive inspiration though, I frequently switch dominant hands for long periods of time to rewire my brain. Thank god for computers because I’ve found my handwriting awful both left and right handed.

During these pandemic times, how are you planning to get the word out on your EP? All the usual outlets?

It will be on www.carbonitesound.com and that’s probably it. Artists are getting robbed blind by basically every service except maybe the non-streaming form of apple music and band camp, so I want to control all my material completely. I already can’t make a living off of album sales, so I’m not motivated to try to stay in the public eye and play the exposure game. For consumers streaming is great, but it’s been more damaging than Napster in my opinion.

And finally, here’s the “op-ed” portion of my column: I don’t want to get all Footloose on the City, but what a lot of people could use right now is live music to soothe our nerves. Outdoors, social distancing, no slam-dancing, in fact, how about no dancing at all, and all the while wearing a face mask when not sitting, eating or sipping on a beverage? I’m not asking for special favors, but the venues are already set up and serving outdoors, so why not let us patrons enjoy some jazz, folk, or blues? I know all the musicians in the area would love to work again. End of op-ed.