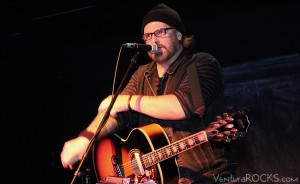 It was pretty cool catching the Numbskull Show on a rainy Wednesday night in the backroom at Bombay’s with Kevin Seconds from 7 Seconds sharing an acoustic evening with Steve Soto (Agent Orange and The Adolescents) and Russ Rankin (Good Riddance).  Kevin’s three-week tour in support of his new release, Off Stockton, kicked off in Ventura.  Rankin told me he’ll be performing the first four dates and the last three dates with Kevin. The night had the three as solo performers – just the artist and their acoustic guitar – and though there were some missteps from Soto, it was pretty cool when he just laughed it off like the true punk rocker he is.

We’re looking forward to catching Karl Hunter of Big Bad Voodoo Daddy as he returns to Squashed Grapes for another show on Saturday, March 22.  In what is being called the Karl Hunter Organ’ic Quartet, Karl will have the legendary Jimmy Calire who toured for several years with America on keyboards, Mario Calire from the Wallflowers and Ozomatli on drums and guitar player extraordinaire Hans Ottsen will round out the quartet.  Tickets are $10 and you should get them in advance at the Grape as this one is sure to sell out fast.

Technicolor Tone Factory out of Boulder, CO, will be making their debut in Southern California area with a free show at Green Art People on Wednesday, March 12.  According to Taylor Frederick, TTF isn’t a jam band that rocks, but rather a rock band that jams.  I took a listen on SoundCloud, and trust me, the band rocks.

St. Patrick’s Day celebrations officially kick off with the City’s annual parade on Saturday, March 15.    We’ll be hitching a ride on Kat Merrick’s Totally Local VC float where Dan Grimm and other artists will be performing live along with Jon Reese of Amigos on air guitar, as we cruise down Main Street.  Give us a shout out when we pass by!

And of course you are officially invited to help Ventura Rocks celebrate our 5th Anniversary with a huge St. Patrick’s Day party at Bombay’s on the 17th with first Irish music from the Lousy Drunken Uncles at 6:00, then it will Rey Fresco making this the hottest party in town.
Do you have any music related news or upcoming shows you want help on publicizing?  Then send all information short or long to  Pam@VenturaRocks.com.