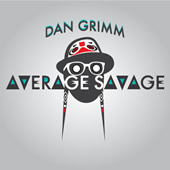 I’ve gotten to know Dan Grimm the past couple of years and have had several conversations with him, the last one with him explaining how “Ventucky” is not a derogatory term…at least not to him.  He loves this town; there is no doubt about that.

With his latest release Average Savage, Dan continues to grow as a songwriter.  His songs tell stories of love, drama, struggle, some of which are quite personal. I’ll be up front and honest, there is nothing sexier than a man who isn’t afraid to show his love for his woman and profess he’ll eat monsters for her.

I love grabbing an ice cold beer at the end of the day, sitting down and putting my feet up while relaxing to Dan Grimm, because I know before long I will feel at ease with any residual stress from the day will just fade away with each song.  By the time I get to “Mirror” I’m relaxed and I’ve finally arrived home mentally, leaving the day behind.

And as much as love relaxing to Dan’s music, I always try to catch his shows live because Dan always surrounds himself with nothing but the best local talent around.  It’s not long before the audience as a whole finds the groove and starts dancing to tunes such as the title track,  “Even Good Love” or “Seven Up.”

Dan describes his sound as “flip-floppytonk” or “rock ‘n’ roll with a little bit of country” and I can’t disagree.  I loved learning the lyrics and anticipating the slide guitar or vocal harmonies.  The album was well produced with a mix of guitar sounds between acoustic, steel and electric (loved that slide guitar work from Neal Casal and vocals from Jaime Wyatt). 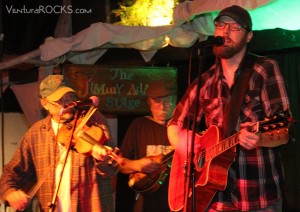