Albert Lee and Friends Deliver in Jam for Jacob at Yolie’s
Benefit for Jacob was held at Yolies on Saturday, January 4, 2014
by Jon Garner

Blues musicians love to play, and when they can lend their efforts to a worthy charitable cause, most of them are all over it. Last Saturday January 4, some true heavyweights, led by the ageless guitarist Albert Lee, got together in the cool little music room at Yolie’s in Ventura to blow a little bit and help with Jacob Hacker’s considerable medical expenses due to recurring cancer. The event was a resounding success all the way around.

Spearheaded by Jacob’s parents Jan and Jerry McWorter (who was behind the drums during many of the proceedings) and Hi Hat Entertainment, the show netted more than $10,000 for Jacob and delivered a lineup of talent was comparable to any you’d see at Doheny or just about anyplace else. It was heartwarming to see all these musical friends cheerfully contribute in a powerful way.

I found out about the show at the last minute, and with the likes of Albert, Coco Montoya, Pete Anderson, and James Harman on the bill, I figured what the heck, I’m in. Little did I know that harp legends Mark Hummel, Rick Estrin and the great singer Curtis Salgado would also appear, the vibe would be fantastic, and the night would turn into a blues lover’s dream.

Had I known the music would be so good that I would write a story, I would have been more concerned with learning who the talented sidemen were than what brand of tequila was being served. 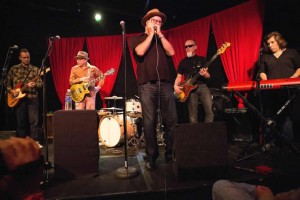 For my money, Mark Hummel, Pete Anderson and the peerless Albert Lee were the highlights. Fortunately, we arrived in time to hear most of Hummel’s set. I have one of his CDs, but I am embarrassed to say that I had never seen him live and didn’t fully realize just how talented he is. His last harp solo in particular was a thing of beauty.

Mark’s website is www.markhummel.com – I’m particularly interested in his collaboration with Anson Funderburgh and Little Charlie Baty. That’s gotta be one hell of a band! 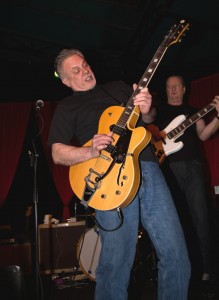 Next up was Pete Anderson. In my opinion Dwight Yoakam could never have achieved the success he did without Anderson’s music direction and quirky, fun guitar playing. He offered ample proof that his style translates equally as well to blues as it does to country. He delivered a really enjoyable set. Check him out at www.peteanderson.com.

Speaking of a guitar style that is equally suited for blues as it is for country, there’s the matter of Albert Lee. During the course of his 50-year career, Albert has toured with the Everly Brothers, Eric Clapton, Emmy Lou Harris and most recently with Bill Wyman’s Rhythm Kings and his own groups. He is a fixture and crowd favorite at Eric Clapton’s Crossroads Guitar Festivals. Simply put, Albert is one of the greatest guitar players in the world. His touring schedule would frighten a 20-year-old; check it out at www.albertlee.co.uk.

I was privileged to play with Albert a few times many years ago, and Saturday I found him to be just as gracious as ever. He took the bandstand following a strong set by Teresa James, who had a tight band and a very soulful voice. Albert’s band featured Donna Oxford, a talented pianist and singer who unfortunately found the volume knob a little too easily, and a very good second guitarist. Albert let them both have ample solo time. 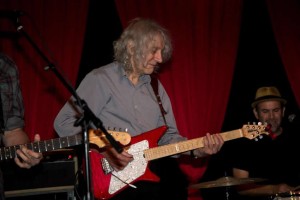 Everything was relatively low-key until Albert cut loose with his signature Country Boy. He and the band proceeded to blow the doors off the place as he has with that song for nearly 40 years. Allowing for the quick changeovers and the large number of bands, Country Boy brought the only standing ovation and encore of the night – well deserved.

I wanted to stay for James Harman and Coco Montoya, but my friends and sanity prevailed and we headed for the barn shortly after Albert’s set. We were not alone. Harman’s first couple songs featured excellent piano solos by Fred Kaplan to send us on our way. It was a great night and a first-class event. I had so much fun I felt compelled to write my first music review in ten years.

For more information on the Benefit for Jacob, visit www.hihatentertainment.com.

Jon Garner has been a professional writer for 35 years and a Butterfield-inspired harpist since 1966. For more information on his band, the Costa Mesa Humor Kings, visit http://www.youtube.com/rodgarnay51.