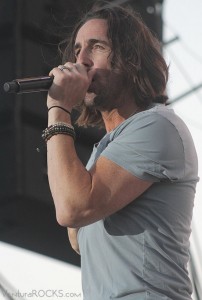 Who else was a little sad to see the fair close this year?  High on my list of favorite shows at the fair were Deep Purple, Beach Boys, Seether and I absolutely loved the Barenaked Ladies; but I admit, I was quite smitten by Jake Owen who packed in the arena with his brand of new Country.  Very well done Fair!

We said goodbye to Jeff Hershey and the Heartbeats as they did their farewell show for Music Under the Stars at Olivas Adobe.  Hershey was on fire and the boys in the band -better known as The Heartbeats – kicked it up a notched entertaining the crowd and going out in style.  Thanks for the memories guys!

Sometimes you just never know how cool it is (and a privilege I might add) to see someone play until you ask, “Who are these guys?”  Well I’m glad I did as the second act warmed up Friday, August 8, as a part of the Ones to Watch series at Bombay Bar and Grill.  I asked Steve Hoganson (Zoey’s) who the guitar player was and he told me Doug Pettibone plays guitar for John Mayor.  Cool, right?  But then he went on to inform me that his bass player, Taras Prodaniuk plays with Dwight Yoakam and drummer Toss Panos with Robben Ford.  What an amazing set these guys did too.

Alrighty then, let’s take a look at what’s coming up that you won’t want to miss.  August 23 and 24 is the 5th annual Spencer Makenzie’s End of Summer Block Party.  Once again shutting down the city block outside Spencer Makenzie’s Fish Company, the event features two stages of music from the likes of Aaron Orbit, Derek Jennings, TresCoustics, Rey Fresco, Shaky Feelin’, Ventura Social Club, Resination and  The Ska Daddyz.  There will be tons of music both days along with their famous Throw Down (corn hole) tournament for some nice prize money.

And then for three days over Labor Day Weekend, August 29 through August 31, it’s Bombay’s 30th annual Beach Party where they bring the beach to the bar creating one heck of a party, with over 25 bands and 6 DJs featuring all genres of music.  With three stages of music (inside and out), the party will feature appearances from 8Stops7, The Rubberneck Lions, Bloody Mary Morning, New Liberty, Mandex, Raging Arb and the Redheads, Rey Fresco and tons more.

And then finally, Rachel Flowers will be giving a free concert at Ojai’s Libbey Bowl on Sunday, August 24, as a part of the ongoing documentary being produced by local filmmakers.  Flowers is an amazing talent who has been blind since birth and playing music since the age of four. Take the family and be a part of this incredible event. Concert starts at 6:30 pm.

Do you have any music related news or upcoming shows you want help publicizing?  Send all information short or long to  Pam@VenturaRocks.com.