In each of my past three music scene columns I’ve been able to report more details on the Concerts in Your Car events by CBF Productions (California Beer Festival). The drive-in style concerts where you remain in your car tuned in to an FM frequency have been gaining popularity in Europe and now here in the States. We knew the first concert was marketed to our new grads featuring two nights starring former Ventura High School artist SuperDuperKyle. Unfortunately, the dates changed after our press deadline in our last issue, so if you thought you missed it, you can still get tickets for his rescheduled shows for June 26 and June 27.

Now if you’re wondering like I was who else they’ll be having live on stage, well I just got wind of their next show which is going on sale Thursday, June 18 for just $39 per car…ready??? It’s one of my favorite bands from the 90s, it’s none other than Third Eye Blind on Saturday, July 25! They’re back playing all the songs you know and love such as “Semi-Charmed Life, “Graduate” and “Losing a Whole Year.” Stephan Jenkins and the boys actually played the Ventura County Fair back in 2016, and they sounded as great as ever. I can’t wait to catch the show in the comfort of my own car. 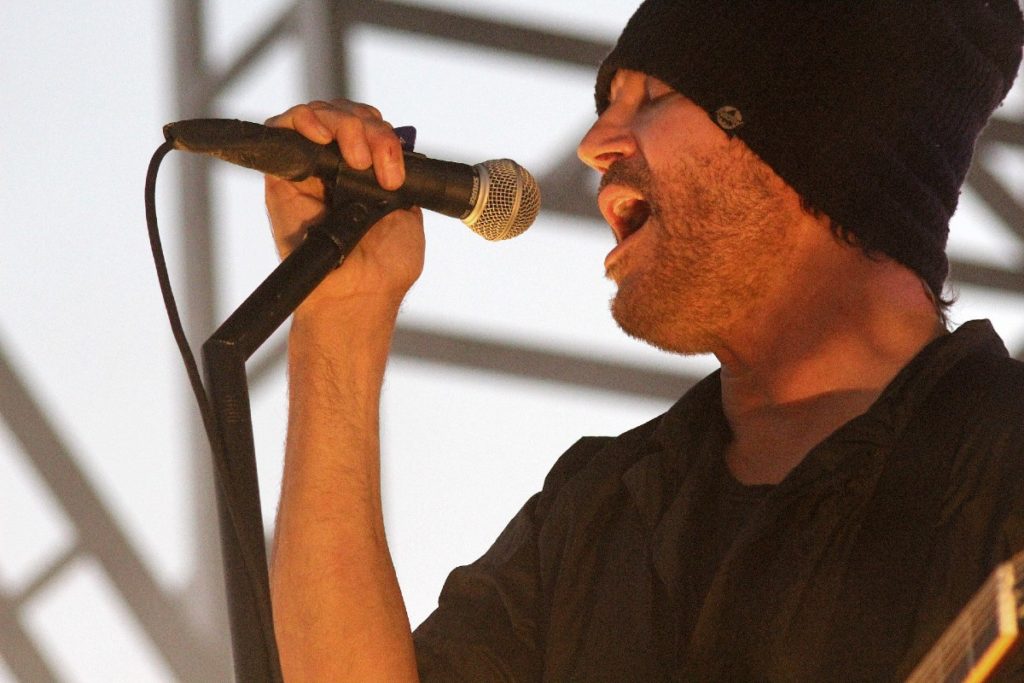 Stephen Jenkins of Third Eye Blind at the Ventura Fair 2016

Along with nationwide touring bands, Concerts In Your Cars has a summer of tribute bands lined up for Thursday nights. It will be along the line of those concerts that had taken place at the Collection the past couple of summers. The company is locking down Queen, Journey, AC/DC and Bruno Mars tribute bands. The tribute shows will be held on Thursday evenings for only $19 per car.

And finally, I mentioned in my last column I was hoping the drive-in theater style concerts would actually start featuring drive-in movies, and ta-da, it’s happening!! CBF Productions is also putting together movie screenings for film classics such as the Goonies, Harry Potter and the Sorcerer’s Stone, and Grease which have been scheduled along with a series of theater productions of Forever Plaid, Jimmy Messina & Friends and Music of the Knights featuring the songs of Andrew Lloyd Weber, Elton John and Paul McCartney.

I heard there is more coming, especially if you have “Friends in Low Places,” but contracts are pending, so stay tuned. For all the concert and movie dates along with ticket information, go to ConcertsInYourCar.com.

By the time this issue of the Ventura Breeze hits newsstand, the closing of downtown Ventura’s Main Street to through traffic will be in effect for at least 30 days kicking off on Monday, June 15. If it is a success and people come out and support all the restaurants and stores, there could be an additional 30 days added to the closure.

As previously reported, the City Council unanimously voted in favor of the emergency ordinance on May 18, 2020, which closes Main Street from Fir to the Mission (or Figueroa Street). If you live close enough, I would encourage you to either walk, ride your bike, or use one of the many rideshare companies, which include our local taxis, Lyft or Uber.

And of course, to keep things lively, there is nothing like live music to enhance the experience, and I understand there will be plenty to go around with at least 32 hours scheduled at press time. Go to VenturaRocks.com for listings.

Most all venues have reopened their doors and a handful are offering live music by either solo, duos or combos where the sound level can be kept at a level where people can still hold a conversation, i.e., you don’t have to lean in to hear someone speaking. This is especially important when a waiter comes one’s table, or you step up to the counter to place an order. Most establishments are requiring face masks while entering their premises; however, once you’re seated, you can take them off. My understanding is the wait staff will continue to don their masks while working the room.

Venues and artists tend to keep me in the loop on their schedules and so I’ve provided those listings on this page. Keep in mind, more and more are coming back on board; I’m hearing Peirano’s, and possible the Shores will have music on the weekends, and when I can confirm their line-up, I will add to the music calendar on VenturaRocks.com.

I was hoping to have solid information to report, and hopefully I will next issue, but know this, the boys are working hard and it’s full steam ahead on construction for the new jazz venue. I’m hearing August (2020) is a possibility.

Squashed Grapes closed over a year ago working through the paperwork and permitting process as well as fundraising to open the Grape. Meanwhile, Adam and Josh teamed up with other vintners (Boyer Wines and Sensation Wines) to open the Winery Ventura down on Market Street which will continue to be their main outlet for their wines. You can find live music there (all genres), with food trucks or order in capabilities, but of course what we’ve been waiting for is a jazz house with a full bar.

As of this month, Gail Sutton will be holding down the bass and backing vocals for Guitar and Whiskey Club. Sutton is an accomplished four and five-string electric bassist who excels in rock, blues and jazz. After having successful runs in Florida, NY/NJ/ tri state and Colorado, she landed in Southern California in 2015 when she immediately started networking and playing everywhere she could. She eventually met and teamed up with Giorgio Bertucelli who has designed and built studios for other rockers including Alex Van Halen. With Bertucelli’s help, Sutton finished construction on her own studio named Gailforce.

Meanwhile you can catch the Guitar and Whiskey Club every Sunday afternoon online during their Clubhouse shows on their Facebook page. Many thanks to Jeff Donovan and Jennifer Wylde for having me on as a guest last month. It was a hoot!

In the interest of supporting local musicians whose incomes have been drastically reduced, and even in some cases stopped completely due to the COVID-10 crisis, please consider reaching out via social media and support one of their livestream concerts and/or performances and make a donation if you can. I’m loving the intimate setting some provide, albeit awkward at first as they’re so used to immediate feedback (cue the applause), but they’re catching on and they do read the comments as they come in on their feeds.

And if you’re not one for watching livestreams, then consider a small purchase of one of their CDs, or a t-shirt or coffee mug. Every little bit helps. Of course, you may find yourself too strapped to help out, so perhaps you might consider just reaching out and letting your favorite artist or band know you’re looking forward to seeing them again soon.