If you know Kelly Zirbes, then you know she’s one of the hardest working women on the music scene. She’s forever booking, promoting, playing, writing, and breathing music. She’s awesome; plus, she’s got the talent!  Calling their brand of Blues, “Roadhouse Rockin’ Blues” Kelly’s Lot features amazing musicians including Kelly’s husband Perry Robertson.

I caught up with Kelly to get the low down on the band’s upcoming Valentine’s Day show at the Patio at Player’s Casino.  Not only is the Patio pulling out all the stops to make a night of romance with some of the most delicious dishes in town, but Kelly’s Lot will have a special guest player all the way from France, Jean Francois Thomas. 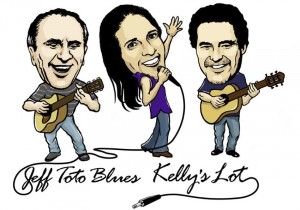 Ventura Rocks:  What’s up with this international exchanging of Blues artists Kelly?

Kelly Zirbes:  It’s all about meeting and playing with other musicians who love the blues.  What I love about this genre is ‘The Jam’. During a blues jam you will play with total strangers and find that you connect. Music is a universal language with the Blues being a universal bridge and language. Even across the world we can all relate to each other when we play the blues. Jean Francois Thomas shared us with his friends and fans in France and we will share him with ours in Ventura

How did you meet?

We met Jean Francois in France on our 3rd tour in European in 2011. We had played at a record store together and became fast friends and he invited us back to his house for dinner. There was 6 of us so that was rather generous. We all fell in love with him, his energy, his songwriting, his guitar playing but mostly just him. We talked at dinner about coming back and doing a few concerts together and in 2013 Perry and I decided to take Jean Francois up on his offer and emailed him. He was thrilled. We all three decided just Perry and I would travel there and start with an acoustic trio adding Jean Francois. He booked some shows and we flew to France. It was a fantastic trip and our bond became even stronger. We repeated the same thing in 2014 but with many more shows and bigger audiences. It was then that we invited him to come to America and play with us. He wasn’t sure he could because he was afraid to fly. But after a couple weeks he changed his mind and told us he would come. 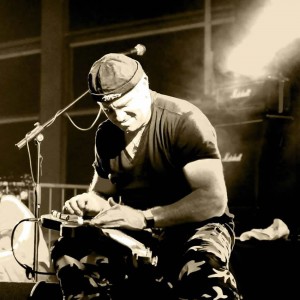 Tell me about Jean Francois Thomas.

He’s a multi-faceted guy. He’s a a teacher of Economcs and Law in Auvergne, France and a touring musician. He discovered blues the age of 30 and was a boxer when he was younger.  He has one of the most giving spirits of any musician I have ever met and he loves the Blues more than any person I have ever come across.

How big is he in France?

I’m not really sure but he has performed at many large festivals in France land has opened for Tommy Castro, Patrick Verbeke, Shemekia Copeland, Nina Van Horn. He has released quiet a few CDs since 1995 and has been given lots of accolades by the French press and media.

This is a Valentine’s Day gig.  How romantic will it get? 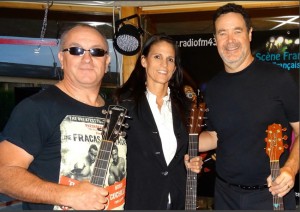 The Patio will be doing a French themed menu and serve French wine. I know Jean Francois will warm everyone’s heart and he will get the crowd going.  I think that in itself will bring romance to the room. The French are some of the most romantic people I have met and it is fitting to share Jean Francois with our Ventura fans on Valentines. You know, he didn’t want to play a lot on this trip. Just one or two shows. It’s a vacation for him, his wife and a few friends and they want to have time to enjoy the sights. Of course Ventura was my first choice to book a show because of all the music lovers that we have discovered in the 3 years of playing here locally. Needless to say there will be lots of love to go around.

Reservations are highly recommended (805) 658-8975, or go high-tech and get your reservations online:  http://pcventura.com/patio/index.php.