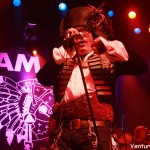 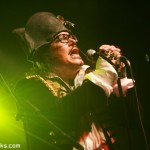 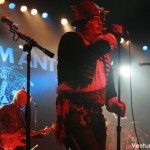 What a blast!  When I heard Adam Ant would be playing our very own Majestic Ventura Theatre, a rush of nostalga hit me.  I immediate recalled the days of driving with the windows all rolled down blasting KROQ standards like “Stand and Deliver” and “Goodie Two Shoes”….It was the days of big hair and even bigger dance moves.

Adam Ant hadn’t toured the US in 17 years, so it was quite exciting to be able to catch the show. Not only would Adam Ant be rockin’ the standards, but the tour was launched in conjuction with his upcoming album, “Adam Ant is the Blueblack Hussar in Marrying the Gunner’s Daughter.”  Yea, I know.  The word you’re looking for is “Anyways…”  So, yea, that’s the name of the album and he’s sticking to it.

Affectionately entitled, Adam Ant & the Good, the Mad & the Lovely Posse, the band arrived at the Majestic Ventura Theatre towards the tail end of the tour.  The place was packed with many old and just as many newer fans who were made up in “Ant-like” garb and make-up; people in the know call them Ant People.  The anticipation was thick in the air. People were smiling, happily waiting for Adam to take the stage to a sold out crowd. Soon enough, the lights went down, the band took the stage and Adam Ant promptly took his spot immediately commanding the room…and just as quickly, the crowd embraced Adam and all his glory dressed in his familiar pirate-like garb.  The old familiar songs blended extremely well with the newer ones and the joint never stopped rocking.  I loved the dual drummers, and singers in costume changes; it was a feast for the eyes and ears. Time and time again when the band would fire up the next tune, people would smile and look around as they recognized their favorite songs and again, the room would start dancing.  It was a fun night watching a true Brit icon.

I’m very much looking forward to the release of “Adam Ant is the Blueblack Hussar in Marrying the Gunner’s Daughter” which is scheduled to release January 2013.